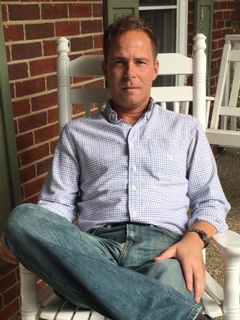 James was raised in a household where creativity thrived, paintings and stained-glass windows beautified the walls, and the arts were as regular as the seasons.  This upbringing will forever be his muse.  James has a history degree from the University of Louisville, where, in his senior year, he was awarded a scholarship as the school’s most outstanding history major.  He won an IPPY Award for The Requiem Rose, which was later published by Sourcebooks as A White Wind Blew.  James has ideas for future novels that run the gamut of history from time periods and topics like Charles Dickens, Jekyll and Hyde, Prohibition, the Dust Bowl, the Sixties, both World Wars, the Golden Age of Magicians, and a series on Medieval Cathedral building.

James is the writer and co-producer of the feature film/tennis comedy 2nd Serve, starring several actors from popular television shows like Scandal, The Big Bang Theory, Gotham, Cougar Town, Shameless, and Ray Donovan.  James is also a USPTA tennis pro, and has coached dozens of kids who’ve gone on to play college tennis in top conferences like the Big 10, the Big East, and the ACC. He lives with his wife and two children in Louisville, KY.

Favorite Books: The Stand, The Cider House Rules, The Alienist, Pillars of the Earth, Beach Music, I know This Much is True, The Burgess Boys, The Shadow of the Wind, A Song of Ice and Fire Series.